Corpus Christi Police Detectives need your help locating this wanted fugitive. Detectives are looking for 31 year old Jeremiah Justice Bryant (10-30-1986). He is wanted for aggravated assault in reference to a shooting that happened in the area of 10600 Larkwood on July 5, 2018.

Jeremiah is 5 feet 9 inches tall weighing 165 pounds. He has brown hair and green eyes. The warrant is for Aggravated Assault with a Deadly Weapon and has a $100,000 bond.

Corpus Christi Police Officers were dispatched to the area of 7300 McArdle in reference to a body wrapped up in a blanket. Officers arrived and contacted the reporting party who showed officers the location of the body. Officers observed a 48 year old female wrapped in a blanket under a tree and some bushes. The responding officers checked the status of the female victim and found that she was deceased. The officers secured the crime scene and called the Criminal Investigations Division. Detectives and officers checked the area and were able to contact a male suspect. The suspect was transported to the main police station for questioning. Detectives questioned the suspect and were able develop enough probable cause to arrest John Smith (11/12/1964) for murder. John Smith was transported to the City Detention Center and booked.

This is still an active investigation and there is no other information to be released at this time. If you have any information about this crime you are asked to contact detectives at 361-886-2840.

Starting Saturday June 23, 2018, Vector control will begin treating standing water throughout the city with larvicide. They will then monitor the mosquito traps across the city and start the process of spraying the adult mosquitoes.

Vector Control is asking the public to help them by taking care of your property. Remember the 5 D’s of Defense:

DEET – Use insect repellent containing DEET.
DRESS – Dress in long sleeves and pants when you’re outside.
DAWN, DAYTIME and DUSK – Dawn, Daytime and Dusk are the times of day when mosquitoes are most active. Avoid being outside during these times of day to prevent bites.
DRAIN – Regularly drain standing water, including water that collects in empty cans, tires, buckets, clogged rain gutters and saucers under potted plants. Mosquitoes breed in stagnant water.
DOCTOR – Consult a physician if you feel sick after being bitten.

Corpus Christi Police Detectives need your help identifying this suspected thief. Officers were called when a victim realized that he had left his wallet at the store. He went back and was unable to locate his wallet. The manager accessed the video surveillance and was able to locate the theft. The victim purchased items and let his wallet on the counter. A male suspect in a grey hooded sweatshirt approaches the checkout. He purchases some items and notices the wallet. As he is paying for his items, he grabs the wallet and then leaves the store. 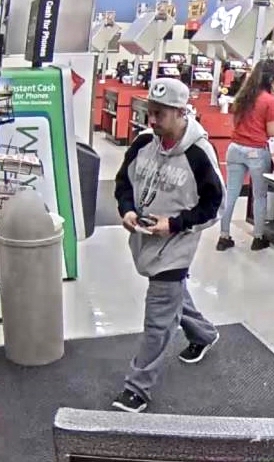 On May 5, 2018 at approximately 12:57 AM Corpus Christi Police Officers were dispatched to 5800 Kimbrough Dr. in reference to a shooting with injuries. Officers arrived and found a 21 year old male deceased inside the residence. Officers contacted the involved parties and transported them to the main station to be interviewed. The preliminary information is that the deceased male tried to enter the residence through a door. He was unsuccessful and then broke a window gaining entry into the residence. A 23 year old male occupant of the residence fired a weapon striking the deceased several times. At this time no arrests have been made and detectives are in the preliminary stages of the investigation.

Corpus Christi Police Officers were dispatched to the 1400 block of Corban Dr. in reference to a disturbance with injuries. Officers were advised by dispatch that the male involved possibly had a gun and the female involved had a knife. Officers arrived and contacted the 27 year old male outside of the apartment. Officers detained the male and made contact with the 31 year old female victim. The victim advised that the suspect became upset after she disciplined her son. She advised that the suspect pushed her down to the ground. The victim advised that she got up and pushed the suspect out the front door. The victim advised that the male pulled a handgun from his waistband and pointed it at her. The suspect then re-entered the apartment, pushed her down to the ground and began choking her. The victim stated that she had a hard time breathing but was able to brandish a knife and get free of the suspects grip. Officers spoke to a 12 year old female that was inside the residence and verified the victims story. Officers located the gun under some household items inside the residence. Officers arrested Michael Joel Hull (06-12-1990) for aggravated assault with a deadly weapon. A search incident was conducted and officers found a pill bottle not belonging to the suspect with a mixture of pills in it. He was additionally charged and transported to the City Detention Center.

Corpus Christi Police Officers were following up on information in the 10900 block of Mayfield Dr. The information was in reference to a suspect that had been stealing cars and committing theft in the area. The suspect was also suppose to be in a white stolen Ford pick up. Officers arrived and observed a white Ford pick up in the driveway. As officers approached they observed a suspect asleep in the drivers seat. Officers gave several commands for the suspect to open the door. The suspect refused and the officers broke a window and unlocked the door. The suspect was taken into custody without incident. Officers investigated and found the LP on the truck did not belong to it and the truck had been reported stolen. Officers located what they believed to be methamphetamine and drug paraphernalia. Officers arrested Kurt Clyde Solis (01-05-1990) and during a search incident to arrest found various ID cards and a debit card that did not belong to him in his back pocket. Officers transported Kurt Solis to the City Detention Center.

Corpus Christi Police Officers were dispatched to 9800 SPID in reference to a stabbing. Upon arrival officers contacted the 57 year old male victim. The victim was bleeding from his back and handed the officers a large kitchen knife. The victim told officers that the 64 year old female suspect became upset during an argument and stabbed him. The victim stated that he arrived home about 30 minutes prior to the call and began drinking with the suspect. He stated that the suspect began arguing for no reason and confronted him in the living room. The argument escalated and the suspect went to the kitchen, got a knife and stabbed the victim. The victim was able to get the knife from the suspect. Officers made contact with the suspect and arrested her without incident. Officers transported Lucinda Finley (09-16-1953) to the City Detention Center. The victim was treated at the scene for a non-life threatening injury.

Corpus Christi Police Detectives need your help identifying this robbery suspect. On December 29, 2017 at approximately 9:10 PM a male suspect entered the store. The employees were behind the counter when the suspect approached them with a gun and demanded money. The employees gave the suspect an undisclosed amount of cash who then fled the scene. The suspect was wearing a brown jacket, blue jeans, black gloves and a black mask. 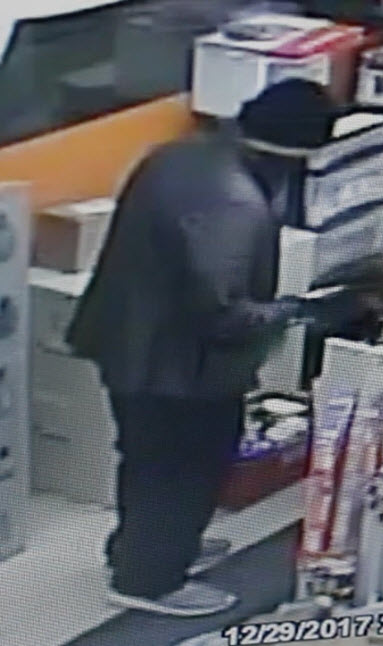 On January 14, 2018 at 8:11 PM detectives believe the same suspect entered the store at 1600 S. Port, displayed a handgun and went behind the counter demanding money. The clerk was not able to open the cash register and the suspect left the store. Approximately 15 minutes later the same suspect entered a store on the 3700 block of Leopard. The suspect went behind the counter with his weapon and started grabbing money from the employee. A brief struggle ensued and the suspect fled with an undisclosed amount of cash. The employee was not injured. 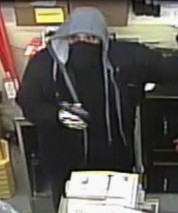 Corpus Christi Police Detectives need your help identifying these two suspected burglars. Officers were called to the 5500 block of Holly Rd. in reference to a burglary of a storage unit. Officers arrived and contacted the victim who told officers that her storage unit had been burglarized. She told officers that the lock had been cut and items were taken. Officers also were notified that several other storage units had been burglarized. Officers looked at the video and observed two males entering the property. One of the males was wearing torn jeans, a dark colored hoodie and carrying bolt cutters. The other male was wearing a brown jacket, blue jeans and white tennis shoes. The were driving a 4 door truck, possibly a Ford F-150.

If you recognize the suspects or have any information about this crime contact Crime Stoppers at 361-888-TIPS (8577) or submit the tip online at www.cctexas.com/crimestoppers.  Information provided to Crime Stoppers is anonymous and if the information leads to an arrest, it could earn you a cash reward.

Corpus Christi Police Detectives need your help identifying this alleged burglar. Officers contacted the victim and advised that he came home and noticed that someone had kicked in his back door and ransacked his house. The victim checked his surveillance system and observed a male wearing dark pants and a grey hoodie taking various item and then leave the residence.

If you recognize the suspect or have any information about this crime contact Crime Stoppers at 361-888-TIPS (8577) or submit the tip online at www.cctexas.com/crimestoppers.  Information provided to Crime Stoppers is anonymous and if the information leads to an arrest, it could earn you a cash reward.

Corpus Christi Police Detectives need your help identifying this suspected burglar. Officers were patrolling and observed a piece of wood securing the front door of the Dollar General had been removed. Officers cleared the building and contacted the manager to review the security footage. A male suspect is observed on camera and making entry in to the store. Once inside he tries to open the cigarette case but was unsuccessful. The suspect walks through the store taking several prepaid cell phones before fleeing the scene. He is described as a tall, thin male. He was wearing a dark short sleeved t-shirt, white Jordan brand shoes and carrying a blue duffle bag with white lettering.

If you have any information about this crime contact Crime Stoppers at 361-888-TIPS (8577) or submit the tip online at www.cctexas.com/crimestoppers.  Information provided to Crime Stoppers is anonymous and if the information leads to an arrest, it could earn you a cash reward.